Fatehpur has found mention since the Vedic period. There is reference about Asani and Bhitaura, nearby places to this city, in Lord Cunnigham’s writings when he discusses about the remnants of  Vedic times. Proofs of Chinese traveller Huen Tsang having visited Asani has also been found there. A number of archaeological findings from around 800 BC, Gupta Period, Kushana period and Maurya period have been unearthed all over the district of Fatehpur, which makes this region a place of great interest to tourists. 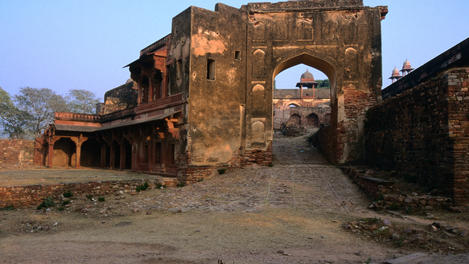 Also numerous temples from the era of the Gupta regime can be seen standing even today in the villages such as Sarhan Bujurg, Tenduli and Korari. The fort of Asani is also from during the Gupta period. There is mention of the Khajuha town in the Brahma Purana- an ancient Hindu scripture. It is also near this place that Emperor Aurangzeb killed his brother Shahshuja in a battle and constructed the Badshahi Bagh (a royal garden) and a huge shelter (with 130 rooms) to commemorate his victory. In Ayah is present an old fort built by Arkawanshi, who ruled over this place. As they worshipped Sun and Lord Shiva, there are many idols of Shiva and Sun in the region.

Places to Visit in and near Fatehpur

Bhitaura: Situated on the banks of the Ganges, this place is renowned for the reason that Maharishi Bhrigu, one of the seven great sages of ancient India, is said to have spent a long time here worshipping and meditating. The flow of the Ganges at this place is towards the north direction, unlike most other rivers in this part of India, making the region very important from the religious point of view. It is also the block headquarter of the district of Fatehpur.

Renh: Renh is a very old village on the banks of the Yamuna from where many articles dating back to 800 BC has been unearthed. Along with this archaeological find nearly twenty years back an ancient idol of Lord Vishnu, made up of precious alloy, was found here, which has been instated in a temple on Bindki Lalauli road.

Bawani Imali: Situated near Khajuha in Bindki subdivision is an Imli (tamarind) tree, where fifty-two freedom fighters were hanged by the British army on April 28, 1858. The tamarind tree is still present at that location with the natives believing that the tree has stopped growing after the incident. Today, it is a symbol of the great sacrifice that those freedom fighters did for the motherland.

Shivrajpur: This village, situated on the banks of the Ganges, is popular for an old Krishna temple known as the temple of Mira Bai- the great devotee of Lord Krishna and Hindu mystic poet of the Vaishnava bhakti movement. The idol of Lord Krishna at this temple is said to have been founded by Mira Bai.

Khajuha: Known as Lord Shiva Nagari (City of Lord Shiva), the town has as many as eighty-six beautiful temples dedicated to Lord Shiva. This place also held great importance during the Mughal rule with it being the main cantonment of Allahabad during the rule of Mughal Emperor Aurangzeb.

Hathgam: This block headquarter is said to be the birthplace of the great freedom fighter Ganesh Shankar Vidyarthi and the famous Urdu poet Iqbal Verma. It is also said that Saint Parashar, the great sage from the Rig-Vedic times and the author of many ancient Indian texts, had lived at this place.

Korari: The place holds great archaeological importance with the presence of two brick temples, which have amazing illustrations and sculpting on their outer sides and every panel having different patterns. Another unique feature about the temples is that they are tilted on their own axes about 4°.

Ghazipur: This town has been there since ancient times and hence is of great historical value. Lot of famous personalities are said to have visited this place such as Chinese traveller Huen Tsang, MK Gandhi, Indira Gandhi, Shyamlal Gupta ‘Parshad’, etc. Some of the places of interest in this town are Paina Fort, Ghazipur Fort (converted into a Police station now), Gandhi Park, Tuglaki Mosque, Murchaura (Battle field), Premnagar, Kanchanpur, Puranathana, Purani bazaar, Mevati muhalla, Dera, Chauk, Subhas Market and Dargah (on Fatehpur road).

Asothar: Situated in Fatehpur District this town lies south of Fatehpur city. It is famous for the presence of a number of Jain sculptures such as the mound bearing five large Digambar Jain figures called the Pandavas by the inhabitants. There is also the belief prevalent here that a shiva ling (a representation of Lord Shiva for His worship) of the Mahadev temple emerged from the ground.

Dhamna Khurd: This village situated about 65 km from its district headquarters on Amauli-Ghatampur road holds a lot of historical and archaeological value. Found here are a number of such buildings like the ancient brick temple of Lord Surya (Chaturbhuj) enlisted by the ASI. Judging by the architectural patterns and structure this temple can be attributed to the last quarter of the 8th century AD. The idols of this temple are rumoured to have been destroyed during the rule of Mughal Emperor Aurangzeb.

Bindiki: This ancient city is situated about 15 miles away from the city of Fatehpur. The name of this place has come from its ruler Raja Venuki. It has a famous historical background being the motherland of martyr Jodha Singh Ataiya and famous Hindi poet Sohan Lal Dwivedi.

Fatehpur has very hot summers (with the maximum temperature going up as high as 45-48°C) but considerably pleasant winters. The place also receives a good amount of rainfall with the average annual rainfall being 870.3mm. So the best time to visit this place is during the winter season which last from November to February.

How to Reach Fatehpur

Various roads such as the national and state highways connect Fatehpur to different places in India. And for traversing to different cities in Uttar Pradesh as also other neighbouring states from here on road there is the option of buses that ply from the inter-state bus station situated in Fatehpur. And if you wish to fly, you can avail the different flight options, both domestic and international from the nearest domestic airport that is in Kanpur Chakeri and the nearest international airport that is in Lucknow, a city three hours away from Fatehpur.