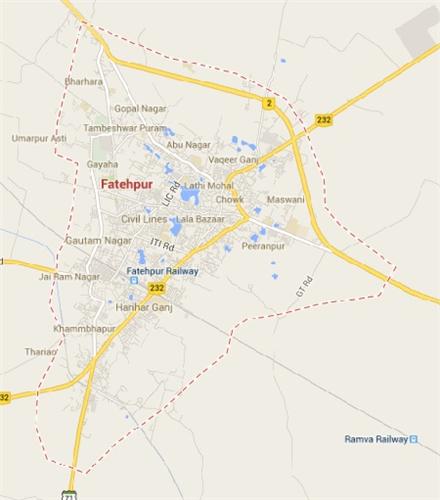 Fatehpur city is elevated at a height of 110 meters above sea level which is about 360 feet. Fatehpur has its coordinates at 25.93° North latitude and 80.8° East longitude. The soil is fertile as the land is situated between two holy rivers that mark the land a name called Doab which means “land of two rivers”.

There are numerous small water bodies, ponds, river canal in the city which in turn fertile the soil and also turns out to be one of the major source of water supply in Fatehpur. Few ponds in the city are the Railway Pond, Patel Nagar Pond, MCD pond, Katcheri pond, Pakka Talaab and Abu Nagar pond. The major lakes in the city are the Al Muslim Lake, Momin Lake and Altamas Lake.

Nearby Places of Interest

Fatehpur is well connected with roadways and railways to all its nearby tourist destinations like Raebareli at 61 km, Kanpur at 76 km, Kaushambi at 97 km, Bithur at 104 km and Lucknow at 114 km from Fatehpur.

Areas and Localities in Fatehpur

The Grand Trunk road passes through Abu Nagar in Fatehpur. This locality homes the Altamas Lake, an overhead water tank, Sadar hospital and few more water bodies. The other main roads in Abu Nagar are the Arshil street and the Connecting road.