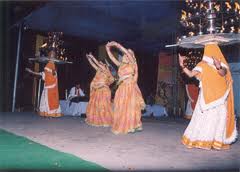 Fatehpur has a mixture of people hailing from different religion living there, which has resulted in a beautiful mix of different culture and traditions. The rich historical past of the city can be seen through the various architectural remains from antiquity- the beautiful engravings on temples of various faiths such as Hindu, Jain and Buddhist, dating back to the period between 4th and 7th century AD, and constructions from the Muslim period.

Fatehpur not only has a rich historical and religious past, but also has been the native place of many freedom fighters and well-known poets- both of Urdu as well as Hindi.

The city of Fatehpur has had its share of both Hindu as well Islamic rule for centuries hence has a population that is mixed. Additionally, there are people of other religions, such as Buddhist, Jain, Christian etc., living here. The dialect spoken in Fatehpur city is the western dialect of Awadhi in addition to Hindi, which is the most important language of this city. Urdu and English languages are also spoken here. Agriculture is the mainstay of income for the people of Fatehpur along with chemical and allied industries, wooden furniture industry, and textile and leather industries lending enough support to it.

Some of the famous people from Fatehpur are James Miller, the Scottish recipient of the Victoria Cross, famous saint Syed Riyaz Ahmad Naqshbandi, 17th prime minister of India Mr. VP Singh, to name a few.

The people of Fatehpur, like those from any part of India, sport colourful clothes. People here sport both traditional as well as modern clothing such as sarees, salwar-kameez, dhoti-kurta or kurta-pyjamas along with the staple western wear as trousers, shirts and denims. For festivals and marriage functions people prefer wearing sherwani, lehenga-choli and ghagra-choli.

Known as Antardesh during the Vedic times, Fatehpur constituted the fertile area in between the River Ganges and Yamuna. Later, it came to be known as Madhyadesh (central region). As per Buddhist literature, Fatehpur has been a part of Vatsa - one of the sixteen Mahajanapadas (districts). There are numerous evidences of Maurya, Kusan and Gupta rule in this area. During the Mughal rule, Fatehpur went under the control of Jaunpur, Delhi and Kannauj. This mix of Hindu, Islamic and Buddhist influences in the city has given Fatehpur its rich culture and traditions, which translates into festivals being celebrated in Fatehpur in a splendid manner. The main Hindu festivals that are celebrated here are Diwali, Dussehra, Holi, Rakshabandhan, Shivratri, Bharat fair, Khichdi fair and the likes. The Islamic festivals that are celebrated in the city are Muharram, Eid, Bakr Id or Eid al-Adha, Rabi' al-awwal procession (Chup Tazia) and Chehelom (Arba'een).

The culture of Fatehpur has both Hindu and Islamic influences along with Buddhist and Jain impact that can be seen through the various Hindu temples and Jain and Buddhist shrines found here from the Gupta and post-Gupta times. The Muslim influence due to the Mughal regime is evident from the numerous mosques and maktab (school) that are present here. However, the architecture of the buildings found in this area is predominantly Indian.